How to Deal with a Sprinkler System in a French Drain

How to Deal with a Sprinkler System in a French Drain 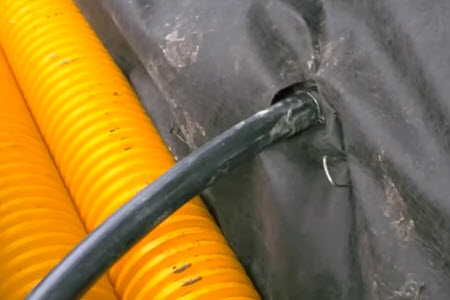 I had a young contractor in Troy, Michigan wanted to know how we deal with the sprinklers. Francisco can feel when there’s a sprinkler there, the Kubota U17 doesn’t have a lot of breakout for us. Sometimes you know, sometimes you wish it had more, but the good part about having a machine that’s not overpowering, whatever that job is that you’re doing, he could actually feel when he, when he grabs a sprinkler line and even though you know when the machine grabs it, you know what ends up denting, the poly, it’s not a big deal because right away the guys on the ground go ahead and they cut a piece out. Then they put their system in. Then when they put their fabric in, look what they do. They paint so they don’t miss one putting it back together. They take a one-inch coupler or three-quarter-inch or a half-inch. It depends. That’s the part that kind of makes it tough. You never know until you start digging what that home has. So you end up in your tool trailer with a lot of parts and pieces. You end up traveling like you’re a sprinkler repair guy because you do a lot of sprinkler repairs.

So this is a one-inch coupler and you can see how nice these guys took these stainless steel clamps and clamp that poly pipe on a barbed coupler. Look at that and it’s like we weren’t even here. So that’s what all these paint marks are. And this is pretty typical what you see here for repair work. This is very, very common. Okay, so we got some more paint over here so I know that there’s more.

See, we can’t let the downspout water get trapped in that little tiny green belt in between the house and the landscape. So we run a solid virgin. This is solid Baughman virgin yellow on the inside, yellow on the outside. You know, that’s the good stuff. That’s the Premium. That’s the Baughman Premium in a solid to a pop-up admitter.

Look at how far we get the water, all that roof water that would get trapped over here. This place was a mess. It’d be really, really wet in between the landscape and the home. We’re now taking that water, we’re helping it. Heck, we’re better than halfway to the storm drain. And we’re letting you know we’re letting the water go here.

Now I want to make sure that everybody understands this. So the way this works, they’re gonna take this fabric when they fill this in with stone and they’re gonna just cut a circle out and have the fabric around here. Then they lay the sod right up against this. Now any shingle, gravel leaves, and debris will just get washed into the grass. The lawnmower will just blow that stuff around. You’ll never even know it’s there. Instead of being left in your French drain system, you want to isolate the two downspouts and French drains. They’re two separate systems. Keep that in mind, but you can use the same trench. That’s a cost-saving to the homeowner.

So these guys are using the one and three quarter inch stone. This stuff really rips, this stuff really, really rips. I really recommend it. Stick with round rock and get as large as you can stand. And what I mean by that is if it gets too big, you can feel it when you walk on your grass. If it’s like a dry creek bed then go with four-inch to eight, talk about voids. Talk about moving water. So, but always go with a round rock. Do not go with crushed stone. Crushed stone, it’s all jagged. It ends up compacted and it doesn’t have the voids.