How to Build the Best French Drain – More Stone

How to Build the Best French Drain – The More Stone, The Better the Drain 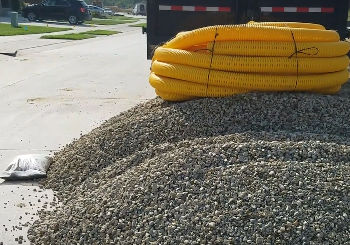 Never hire a contractor that’s going to bring the stone to the site in a van or on a single axle utility trailer.  I know that a lot of contractors see me as a whistleblower and I don’t mean to be a whistleblower. My intent is to educate the homeowners especially. There’s a lot of guys doing their own drains and if you drainage guys benefit from watching our videos, that’s great. I’m sorry that if some of you are taking this wrong.  You know I’m against using a trencher. It doesn’t make a big enough channel to really be a great French drain.

Now here’s an example of how much stone you get from a bag. That’s a bag of peace down and that’s what a lot of the guys are using and then I just got a bag of some coarser rock, which is what I would purchase. The bigger the voids and more water you’re going to move.

The drain we’re putting in today, that stone came in that trailer and we have to go get another load of stone. This drain is going to take two loads of stone. Now looking at that bag, how many bags would you say to equal just that one pile? Not even a second pile we’re going to bring in. I think it’s funny, these guys that operate in cube vans, extended vans, they bring bagged stone to build a French drain. How well is this gonna work? How much stone can they possibly bring in bags?

If they come with a utility trailer with a pile of stone and the utility trailer, it’s typically a one axle trailer and they’re shoveling it off the trailer. Again, it’s not like bringing it in a semi or a gooseneck dump trailer like you see here on this dually.

Simply put the more stone, the better the drain.  For more information on French Drains contact the French Drain Man at 248-505-3065.