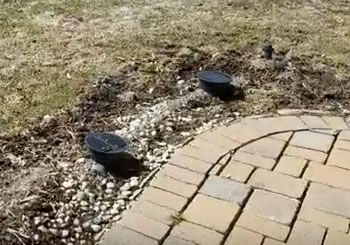 All right, french drain failure, it happens right at the install. Whoever installed this system, They either didn’t know any better, or they just took advantage of the homeowner by not digging out a trench. Creating a really really decent channel and filling it full of stone.

What they did is they went ahead and they put these surface drains. Which, by the way, a surface drain drains the surface water, it doesn’t lower your water table. So, I have a lot of issues with surface drains. You’re not going to find them in my systems. And they allow contaminants into the pipe. People always say you can clean the pipe out from here. You know what, you shouldn’t have to clean the pipe out period. If it was done right, you shouldn’t have to clean it. It should be fully contained. There shouldn’t be any surface drains in this system. All this should be is an open French drain. The water comes off the brick patio into an open French drain. And then the water’s rapidly fed to the corner of the lot where everything is draining. And then this patio would have been fine.

So you can see this is dirt. This is dirt. You see this little bit of pea stone.  So, there we go.  There is the pipe.  That was deep. That was really deep. You want the pipe at the bottom of the trench and you want the pipe really deep. Now the frost has heaved the surface drains, and also has surfaced the pipe. This is an example of what not to do.