How deep should downspouts be buried in Michigan?

How deep should downspouts be buried in Michigan? 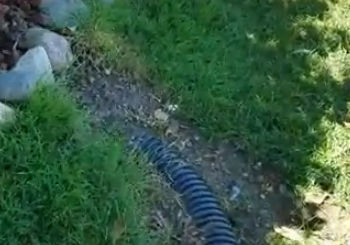 How deep should downspout pipe be? This pipe was run last year and we had a pretty good winter. A lot of freeze and thaw and the frost pushed it up. We didn’t do it were being contracted to fix it.

What I found works are approximately a 14-inch excavation and then lay the four-inch corrugated pipe in that trench and then it’ll end up with 10-inches of soil on top. That’ll keep it down and prevent the frost from surfacing the pipe.

This downspout pipe has surfaced because it was a shallow dig. It’s clay here and it’s hard digging and a lot of guys just don’t want to make the effort. If you don’t have the equipment for it, don’t take the job. This homeowner can’t get this, this contractor back to correct this problem. So, unfortunately, they have to pay us. They’re paying for a second time basically, which is unfortunate.