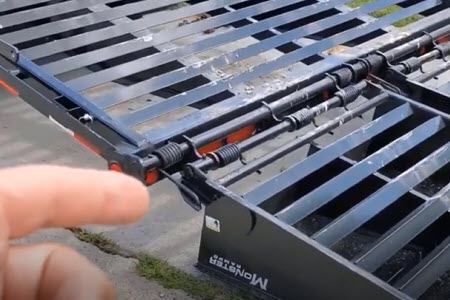 Just slipping something for the contractors. Guys go to these monster ramps that PJ’s making. These monster ramps, you could run a full-sized skid loader and you could run a mini up the same ramp and they got spring assist. We just love it and this beavertail, you know, instead of wood. I like how they did this, you know, it’s the angle iron, you know, with the, uh, with the edge up. So that works really nice. So, I thought I would share that with you.

By all means, guys, I’m telling you, if you’re going to take this seriously, you gotta get yourself into the gooseneck stuff because that bumper tow stuff, you can’t move near the equipment or near the stone or near the dirt. So, Scotty and I, we’ve been pulling all kinds of trailers for a lot of years, but, and you know what, we like the PJ stuff, you know. Sure-Trac is good. We’re happy with that as well, but that’s how Scotty and I, that’s how we roll.

I hired Scott when he was 17 and now he’s 45 and he and I, we’ve got a lot of history. We definitely feel like we got these things figured out and streamlined. So when I make a suggestion to younger contractors, I’m telling ya, you know, I’m speaking from experience, it’s true worldly experience and we’ve tried a lot of things and we’ve got this to where it runs pretty smoothly.

This is knife cut. It’s not solid. I mean it will appear like it’s solid cause you can’t see the knife. They don’t remove material and they make knife cut. You can just see where a blade cut that. I’ll do a video and show you how that works. I’ll put it in with this.

Welcome to the French Drain Man channel. I’m Robert Sherwood and I just wanted to give you a demonstration on how knife-cut works in our leach fields.

Depending on how poor the percolation is in the soil where we’re doing the install that dictates how many runs of knife cut we put in. Now in the event that the soil just won’t take in any more water, we run several knife cut, several runs and they act as a reservoir. When it’s sweating it out like this, the ground can usually keep up with it.