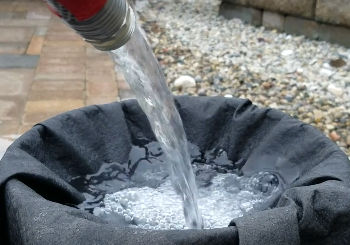 This is a video I’ve been meaning to put some time aside and do for you the homeowners, the DIY guys, and even the homeowners that are shopping for a drainage system. What to ask for, what the tell your contractor you want. Actually, you’re the customer, they’re not willing to do it, hire somebody else. You do want a Geotextile, non-woven fabric. You don’t want to build a system without it. Matter of fact, you all the work that goes into building a system and to miss that one step. Now you just gave your system an expiration date and it’s really unfortunate.

We do a lot of commercial work as well and whatever the engineers spec in is what we will use when we designed our own systems, we have the couple gotos that we really love. Now the first one, this is, this is our fastest, it’s a four-ounce. Love it for our open French drains when we have a lot of surface water and we want to just turn our French drain into one long channel drain, this is what we use.

Well, I have the hose turned up all the way. You see it takes time. I am trying to show you how fast it’ll take the water in. I have a pretty good stream. I have great water pressure. So. All right, so let’s, let’s just fill this bucket real quick and then we’ll move on to the eight-ounce fabric. So, this fabric I love for surface water and it’s going to protect the drainage systems that I built for my clients. It’s going to prevent the gravel from migrating into the subsoil and the subsoil from migrating into the gravel. That’s where they plug. That’s why you want to use this. So that was the four ounce.

This eight-ounce. This will slow it down a little bit. All right, you can see how heavy that is. Always use this for your retaining walls. When you’re using boulders and big slab rock and things like that. You don’t want to use no lightweight. You want to, you want to definitely use this. Okay, so here’s eight ounce, show you the difference. So when I move the hose away, you can see it takes that hesitation that just it filtrates all the water. Well, this is going to last and last and last the last decades. That’s what’s amazing about this, but I wouldn’t recommend this for open French drains Open French, drains your moving sheet water.  Sheet water is when you have it just coming off a carport or coming off of a concrete parking lot or concrete driveway. Sheet water is some serious stuff. You can’t screw around with it.

So now you. You see the two fabrics that I love the four-ounce and the eight-ounce. You see their performance. They both perform well. So why are guys out there giving geotextile, non-woven drainage fabric, a bad rap? I can tell you why. There’s more profit. It fattens their bottom line when they don’t have to pay for this and it’s very time consuming when installing this correctly and now I’m going to go over that. This is the most important part. If you’re a contractor and you just really want to know the truth about drainage fabrics, non-woven geotextile, nonwoven fabrics. This is where everyone if they truly feel it doesn’t work, this is where they basically incorrectly installed it and seen poor performance in it and from that point on, felt that it was bad to put Geotextile non-wovens filter fabric.

So that’s how fast we fill a five gallon pail. What does that rated? That’s rated a 140 gallons per minute through a square foot. That’s what four ounces rated and the eight ounces rated 90 gallons per minute through a square foot. So you got the guys that really know the truth. They just don’t want to spend the money or the time they use it and they’re out there. I see them. Here’s the eight ounce again.

Okay, so now the honest guys, the guys that honestly have a bad experience decades ago, I’m speaking from experience decades ago I didn’t realize the importance of trimming this to fit and doing a really nice stitch. Taking the time to do a real nice stapling and just a couple of inch overlap.  So, we would go ahead and put in the filter fabric, the geotextile nonwoven filter fabric. We put our stone and pipe in and then whatever we had leftover on that, on the width of that role, we would just fold. We just fold it and put it in the trench and cover it with dirt. That’s where the bad experience comes in. You don’t realize, well, you seen how the eight-ounce went quite a bit slower, so can you imagine if you overlapped then a heavy overlap with the eight ounce. It’s not going to move water very quick at all. If you need to build a screaming system for surface water, my systems do both. They take care of surface water with no inlet basins. You know, I preach against no inlet basins because they let in organic materials that become dirt. It doesn’t matter if it’s pine needles, leaves, bark, dust, grass blades, it all breaks down and becomes organic material. Your pipe ends up half full of topsoil and you know at the end the end of that system. That’s what happens, that’s what does it end and when I pull these failed systems out, this is the eight ounce by the way, there’s a full bucket again. So you got the guys that don’t want to pay for the filter fabric, they don’t want to take the time to install it correctly, and then you probably got a few honest guys out there that are saying, yeah, don’t work because they didn’t trim it.

Now the manufacturer says the overlap it six inches. That’s where a subsurface water drain. Don’t do that. Don’t do that. If you want to grab all your surface water, you want to grab all your surface water, just do a couple inch overlap. Take your time to staple it and do a nice stitch and trim it so you don’t have a heavy overlap. Okay, this is the four ounce. This is amazing. It’s crazy. I love this stuff. Open French drains right here. Let’s move some water.

So we’re going to be showing you a lot in the upcoming year. Everybody’s been asking a lot of questions. I can’t believe how many people I’ve talked to this season. They call the office, you guys are driving my office manager insane by the way. I’m usually out in the field, usually talking with homeowners and designing the systems and the boys are putting them in and sadly the office manager’s telling you the truth when she says, I don’t know, I just run the office. So I’ve caught a bunch of you while I was in the office and I talked to probably a couple thousand people this past year. It’s been truly amazing, the response that we’re getting because of the videos we’re putting out.  We’re trying to educate the homeowner so they know what to buy. We’re also trying to educate the DIY guy who’s putting in the French drain himself,

You’re looking at the eight-ounce right here. This is Geotextile nonwovens eight-ounce fabric. You can see that it takes a moment for it to filtrate the water from depending on if this was a cover drain. I love this stuff for commercial jobs where there are big wall material boulders and slab rock and things that are nasty and going to cut a four-ounce fabric really easy and this eight ounce does. If I’m not looking for speed, if I’m not looking to move water as fast as I can possibly get it to go, I’ll use that opposed to the four-ounce.  But in so many cases, homeowners want the water gone as quick as it impacts the ground. Its expectations, you know, it’s just the times we live in. So the four-ounces, the 200milese an hour, the race car of the geotextile nonwoven fabrics, if you will, and the eight ounces. It’s the bad boy. It’s going to last decades and it’s also fantastic around sharp objects and anytime you’re building big retaining walls and things of that nature.

So yeah, this up and coming year we’re gonna try to go into more detail. We’re going to show you more of the job itself, maybe explain a little bit more why we’re doing what we’re doing, how we ended up doing the design, uh, and laid it out the way we did. You know, we just started out by trying to make seriously just quick videos, videos that were just a couple of minutes long so that we can just give you a quick education on it and then you could move on. But people want more, people want more, they’re just calling and they’re asking all kinds of questions. So we’re going to, we’re going to be providing you with a lot more information and upcoming season on.

If you like, the information that, that we’re putting out. And if you found this video helpful, please give us a thumbs up. It does support the channel. If you’re looking for a drainage system in southeastern Michigan, that’s where we’re located and that’s the area we service, give us a call at 248-505-3065.