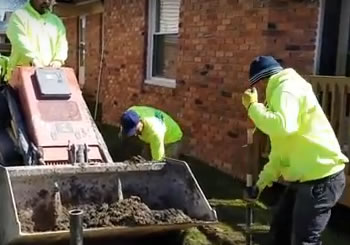 All right, this is what it looks like after a storm basin has been cored. We still need to use hydraulic cement to put in a piece of schedule 40 PVC that we’ll hook up to with corrugated plate for a French drain. But I just wanted to show you the trench and the amount of dirt that comes out and gets hauled out.

Now we do have our laser transit set up so that we have pitch and we do have a slope. Here’s our transit. And we’re also catching all of the rooftop water, all of the runoff water.

To the right you can see the neighbor, his house is higher and you could see that his downspouts. Basically, all the water ends up on the site that we’re working on right now.

We’re also taking care of an issue where ice spills up on a sidewalk. We cored the concrete. Now we can go ahead. Put the gutter back on the house. Hook up some drain pipe. Take it out to the French drain.

Getting back to the French drain trench here. We actually ran into an old septic tank it’s no longer in service but we’re going around it because we’re not gonna have enough slope. The top of the tank was at seven or eight inches and we’re at about 14 inches deep here. So we’re going around it just so that, We get proper drainage.

Now the homeowner wanted to keep the dirt because, along the seawall underneath his deck, it settles. I just want to show you the amount of dirt that comes out of a run like this. It doesn’t really matter what the access is. Like we have a yard full of equipment, we have the right tools for the job.

Now over here, you’re going to see all the dirt that has come out. What you see here, times it by two. We’re halfway there. So the homeowner just told me He’s about at the end, he doesn’t need more. The rest we’re going to haul out with our dump trucks. And then we’re gonna fill that drain. It’s going to be filled with a coarse washed rock and just a few inches of soil over the fabric and sod on top.

I Need A FREE QUOTE For a French Drain System Installed in Macomb or Oakland County, MI