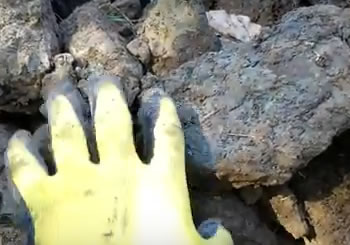 I bought this double inlet basin just for this video. I don’t own one because I don’t need one when I’m building a French drain. When you dig a channel out for a French drain, you fill it full of stone. If you got to put surface drains; if you need to buy parts like this, grates like this and bring them to the surface, you know what they tell the homeowners?  Oh, this is going to be a great place to clean the pipe out from or this is also serving as an inlet pipe.

Well, now they’re just admitting they’re not building you a French drain. An inlet pipe for air, are you kidding me. A vent pipe? In a French drain? If the French drain takes in the water, believe me, you don’t need a vent pipe. Then instead of a hauling away all the dirt and filling the trench with stone. What do they do?  They put some pea stone on the bottom and then they put the dirt back in. So they can avoid the cost of haul out and the cost of the additional stone it would take to fill this channel.

Now if they do have a perforated pipe, water will make it to that perforated pipe until it plugs.  Even if they put fabric around the pipe, or by the pipe, with fabric around the pipe. A soccer sleeve, as we call it. This will fill. What happens is, as long as there are air pockets here in the soil, the water will make it down here to this perforated pipe. Once this becomes compacted. Which does not take long. Once a soil is compacted, you’re no longer gonna get water to that preferred pipe. You can get the surface water, from these basins you’re putting in. This inline basin system. This is some sort of surface water. drainage system. This isn’t a French drain system that they’re selling you.

It does not lower the water table. It’ll catch the surface water but it’s not going to lower the water table so it’s going to be squishy and people are saying why is it so squishy back here? I paid for a French drain. Why is it so soft back here? I’m mowing the grass and the kids are playing and it’s all squishy. Well because this is only gonna catch the surface water, that’s it.

French Drain Man!  Stop Ranting and Give Me A FREE Quote on a True French Drain!