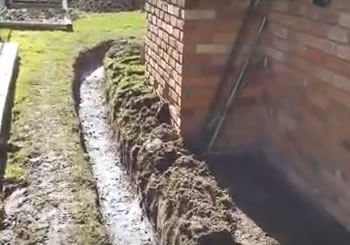 There’s a lot of different pipe out there for French drains. I prefer the deep saw cuts. The way we build our French drains, they’re not gonna plug. This not gonna let dirt in. It’s gonna move more water. That’s what I want.

We like to use 6A, not pea stone. It’s coarser. TThere are bigger voids between the stone, it’s gonna move more water, simply put and that’s what we’re after. And we bring it in semi loads not by the bag, so it’s not bag product.

If you’re one of, I’m gonna say probably 5%, you’re lucky enough to have a storm drain that sleeved on the property. Most storm basins aren’t sleeved. This one happened to be sleeved. Basically, you just, to make the connection from the schedule 40 sleeve, to the corrugated pipe, they sell a coupling that goes from schedule 40 to drainage pipe, four-inch drainage pipe. Well, you glue that on, and they also now make an adapter that slides in that coupling that goes to corrugated, and that snaps onto those ribs that you see.

All the dirt from this trench will not be put into this trench at all, it will be hauled away. The original sod is kept, we basically keep two and a half inches of root. That will be laid right on top of an eight-ounce filter fabric.

We’ll line this trench with an eight-ounce filter fabric, fill it with all that coarse washed stone, lay the fabric over the top. Fold the sod back. And this system will be maintenance free. It’ll be completely contained.

The downspouts, we’ll put the pop-ups right on top of the French drain. But we’re not gonna tie it into the main. That way, you don’t have to worry about debris from the rooftop plugging the pipe.

I Need a FREE Quote on a French Drain in Macomb or Oakland County, Michigan!

When doing it right the first time matters, give us a call.