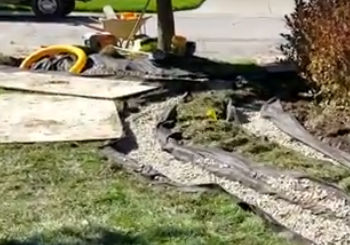 We’re installing a large drainage system, Freedom drain / French drain, as they’re known. We have the neighbor’s driveway water running off into this collection area. We also have the roof water. You can see the downspouts. There are the gutter troughs, so we’re picking up all that water, concrete being non-permeable. We’re not losing any water in these rain events. It’s all collecting right here.

This homeowner that contracted me, they have their own roof water and the properties elevated and then it comes down to the side lot here where it’s a low point. You have to parallel stone Freedom drain or French drain systems. Normally this water would just run down this swale out over the curb.

There’s been a bunch of landscape that’s been put around an electric box to hide the utilities. That dammed that swale. This already wasn’t a good situation, which is the high volume of water that this area was collecting; and it may have needed a French drain even without that landscape, but that landscape most certainly made it worse.

It’s not a problem. Hide the utilities. You know, we can just put it in a French drain as you see here. So we’re writing the parallel drains because this area so flat and wide, that one drain wouldn’t be enough. We had to run two. There was a low spot here. We wanted to grab a bottle of water. Now in previous videos I talk about trees, how they lift the ground. That made it worse too. So we have all these elements working against us.

Now I have videos up how to build a French drain system around the trees. I recommend watching it if you haven’t seen it already. You have to do an over-dig. Why do you have to over -dig it? Because of this tree, as the routes get larger, it’s gonna lift the ground and everything. It doesn’t matter if it’s a sidewalk or a French drain system. So you over-dig it. You overdid it. Knowing that over time it’s going to raise this system. So we did an over-dig here.

The other thing that we do, we put a trench liner in here. We’re trying to throw everything at it that we can to protect the drainage system from this tree. The trees are a Freedom drain or French drains Kryptonite. This system here would last to the end of time if it wasn’t for that tree. However, I want to build a system to where I know the homeowner is going to get 20, 30 years out of the system before that tree compromises the system. I want to be dead and gone before this system quits working and that’s the plan. Build it to last, built to last. I can’t do a thing about the tree being there, but I can build a system to where we buy these homeowners 20, 30 years.

I don’t know how well you can see where coring through a storm drain catch basin that’s in the street. We’re going under the curb. This is the best way to evacuate the water from the system. If you have one of those, take advantage of that. That’s a technique that you can use.

I also want to take this time to remind the contractors and DIY guys that watch her videos and read our blogs, make sure when you’re using your Geotextile non-woven drainage fabric, and by the way, I need this thing to scream, so I use a eight ounce and a four ounce. This happens to be our four ounce, the eight-ounce Geotextile fabric that we use, let’s 90 gallons per square foot through in a minute. This is going to let 140 gallons of water per square foot. I really need this system to scream. I needed to move. So this is a four rounds fabric. You never want to do a heavy overlap. I see guys giving geotextile a bad rap. They think it don’t work. They don’t believe in it. It’s because they overlap it. When you overlap it, yes, now you create a situation where the water can’t get through the fabric, so you just want to overlap at a couple of inches enough so that you can get your staples in and then go ahead and put your side with two and a half inches of root back over top. This is just the 101 of French drains. Make sure that you fully wrap your system. You want it fully wrapped so that no contaminants can get in it. This system will never need to be cleaned or we’ll never need any kind of maintenance.

The other thing that I want to show you is once we go ahead and pin all the Geotextile non-woven fabric back so that we can put the side overtop, there are no inlet basins. Notice how there’s no inlet basins. The water’s gonna run right through this stone. This system’s going to scream. You don’t need an inlet basin. An inlet basin only allows contaminants in which is going to shorten the life of your French drain system or your Freedom drain. So don’t allow contractors to put inlet drains in your French drain system and if you’re a DIY guy, build it like we show you. We got plenty of videos up. Please just go to our library, watch our playlist.

I’ve covered a lot of material in the past and if you’re a homeowner and you’re looking for this service in south eastern Michigan, give us a call at 248-505-3065.