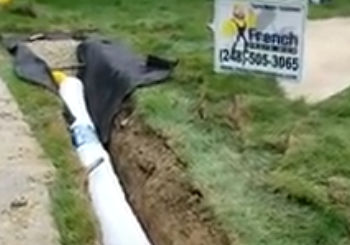 So that’s the advertisement, right? That’s how they solicit this product.

Now in clay conditions, they’re recommending that we use the filter fabric that we’re already using in our stone drains. And I know why this, it’s like a netting. It looks almost like a screen door, but they say it’s a allows 300 gallons per minute through a square foot, I believe. Yeah. That’s to, to achieve that, you got to have pretty much nothing between your poly rock. I want to keep it correct here. Poly rock. So we do it like they say, we go and we line the trench. We put this EZ Drain in.

My stone just pours the shape of the trench. I dig. This doesn’t. So when we backfill, we’re supposed to backfill with something permeable and they suggest like a topsoil. Well, where I’m located here in Michigan, it is so rare to get sand based topsoil. Everything has clay based topsoil around here, everything. So I’m left to just go about this through common sense.

Common Sense tells me I got to backfill this product with stone. So you’re not supposed to bring in stone, it’s a gravel free system and they want you to put topsoil on top of it. Well, tell you what, if I put topsoil from this location, I mean I could drive literally 50 miles in any direction and all I’m getting is clay based topsoil I’m going to tell you that.

It’s going to compact, it’s going to compact and no water is going to go into the system. So for Michigan, for the soils that I work, and I’m telling you this is not ideal at all. I’m glad they advertise it as a gravel free alternative. They don’t try to state that it’s better than a stone trench drain. I’ll it. There’s, there are cases where there’s nothing better than the real thing, a true gravel French drain, it can’t be beaten.

Now it’s, it’s biggest. Why is this, this part right here where you connected pipe, where you connected now your backfill with something permeable. You have to use stone. I’m going to tell you right now, you have to use stone. You literally have to use drainage fabric in your trench. It’s a good thing that stone will pour underneath. It’ll support underneath the pipe and fill this joint. That way you won’t end up damning and blocking the trench.

Now you’re going to have to pour stone between the fabric and the EZ flow. You can’t be sticking topsoil. It wants something permeable. It’s got to be stone. So you’re still bringing in stone. To my point, this isn’t gravel fee in my world. If you can dig the perfect whole and you stuff it in you at least bare minimum. Gotta bring gravel in at these joints.

Will this work? I don’t doubt it will move water. Now they advertise these poly rocks are good for 100 years. Okay, well I’m not going to live that long. I’m never gonna be able to argue that. I do know that rock lasts forever. Okay. Rock will stand the test of time. It’ll be here when we’re all long gone. A big channel of it is not going anywhere, so I’m going to guarantee a stone French drain built right will last you forever. The only thing that can ruin a stone French drain is a tree and I just turned down a job because they said they wanted the draft the yard to plant a bunch of trees in it.  I’m like, Geez, the French drains Kryptonite.