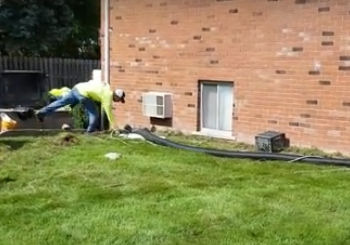 We’re running a downspout, an apartment building. We’re using a dual wall corrugated pipe. It’s smooth on the inside and corrugated on the outside. Very flexible, but yet rigid, strong.

All right, let’s go through the system so I can explain why we use the dual wall. You can see by the big trees in this neighborhood, they have a lot of leaves. There’s a long gutter troughed on this building and it’s impossible to get up on a ladder and keep these gutters clean.  So I know that these downspouts going to see leaves. There’s going to be leaves coming through this downspout.

Now I’m not going to bore you with the math, but I’ve already did the calculations and when the water falls at the height that this downspout happens to be, by the time we get into the underground system, we’re going to pick up a lot of velocity and we’re actually going to have, and again I’m not getting into the math, I’m not here to bore you with that, but we’re going to have nine PSI pounds per square inch. That is fantastic. That’s going to be great.

Now, this was the long run and we’re taking it away from the building. We’re using 2, 20-foot pieces of dual wall pipe and we’re taking that to a six-inch NDS catch basin so we can clean those leaves out the dual wall. The smooth inner wall is going to let the leaves run through this pipe. It’s like a slip and slide. It’s just like a luge. So all the leaves are gonna basically come down this pipe into this NDS catch basin. So the maintenance is literally to just take the lid off, clean the leaves out of the bottom. And that is it. It’s that simple.  In truth though on a good hard rain, it’ll blow that lid off and any shingle grab on leaves in the basin. We’ll just end up in a line about the only real maintenance here is putting that lid back on after a hard rain.

Now we did use an agricultural tape. I don’t, I can’t show you that because they already. These guys work so fast and swift that they already have it covered up. But, there were, there were 2, 20-foot pieces here. So there’s really just one connection, there was one connection right here where they’re standing there packing it down, and then we use the agricultural tapes so that there will not even be any leaks.  In truth, it wouldn’t even matter. It’s just a to give everyone a piece of mind that agricultural tape, it’ll last for 100 years and in this pipe will last 200 to 500 years.

Now to run dual wall pipe, you will use single wall at the gutter to make that connection at the gutter and to make a connection to the dual wall with a 90, you do have to use a single wall for a nice clean installation. It happens to be Advanced Drainage Systems. A single wall corrugated pipe there you can see the green line, that’s their trademark and then you can see some agricultural. That’s their cultural tape that I’m referring to. You can see a little bit of that. It taped up the seam of the 90 there, so there were no leaks at the foundation of the house.

Now there are all kinds of downspout adapters. These are pretty cool. We really like these because you can snap them down inside it, a few extra clicks. Why is that important? Well, especially a new construction where there’s a lot of settling that’s still occurring. That can settle and instead of the pipe coming apart from the downspout, it’ll actually click a couple of times in the corrugated pipe and you’ll still have a good strong connection. So there’s a lot of them out there, but you just have to find the one that doesn’t have the ring around it.

Now, this did a lot of damage prior to installing this. You can see this retaining wall, this, this concrete retaining wall had shifted. There was a lot of erosion. It was really doing a lot of damage to the foundation. The foundation damage alone was what’s going to end up in the tens of thousands of dollars right now. We put some drainage fabric between the building and the wall that had shifted and pack some dirt in it just so that we can get the right elevation.  So that we’d have some slope so that the water would run away from the building to our NDSs catch basin way out here in the lawn.

For underground drainage systems in Southeastern Michigan, give us a call at 248-505-3065.