Drainage System Failure do to Inlet Basins that Allowed Contaminants

Drainage System Failure do to Inlet Basins that Allowed Contaminants 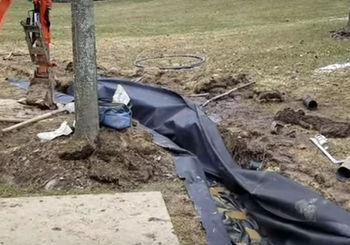 What you see is a drainage system that has failed all that pipe you see right there and all those surface inlet drains. This was some sort of somebody’s idea and how to take care and manage yard water and it just does not work. Surface drains, we’ll capture some of the surface water but it doesn’t take care of the saturated soils. You need to have a French drain full of stone so that the depth of the trench that you dig down to you, you’ll drain the water, the saturated soil down to that level. With a surface drain system, you’re only going to catch surface water and you’re still going have all the problems that you get when you have saturated soils, Where when you mow the lawn, the lawn is really soft. In this case, the patio is destroyed, this whole patio has got to be relifted and they’re going to have to install it after we get done. Put in a drainage system and to prevent this from happening again.

We got an open French drain on both sides and in front of this patio so the water can just run right through the stone and we have a triple pitch. Basically, we have this patio that’s going to be pitched away from the house and the water’s going to go into the open French drain. It’s a walkout basement, but we have a heavy pitch this way. So we’re catching all that water here. And then there’s a berm was some evergreen trees and the water is all running this way. So basically we’re grabbing the water here. We’re going to grab the water here. We’re picking up the water that comes off the patio here. We’re taking care of all the yard water, we’re managing all the surface water as well as the subsoil water.

We’re going to be able to prevent that patio from going through all these heave and thaws and ending up in the condition that it’s in. And then right here we have this maple tree. This maple tree. It couldn’t be in a worse spot, and this is, I would have preferred to seeing this tree removed, but the homeowner loves it. It’s not going to part with it. So what we’re doing is we’re putting in a trench liner. Trench liner is going to protect our French drain. It’s going to make it really, really hard for that tree to do damage to a French drain. We also do an over dig because in time that tree’s going to get roots. They’re going to get up and underneath our trench liner and it’s going to push the system up. If we do an over dig of six inches, that buys us a lot of time. By the time this tree actually roots underneath the system and lifts the French drain system, it’s going to be decades from now.
For a French drain system designed and installed correctly, give us a call at 248-505-3065.