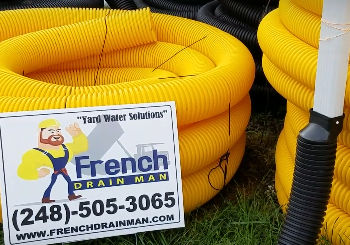 I see this advertisement all the time. I see these diagrams all the time for ways to filter out the leaves and catch the water. So I want to explain to you why this is not a good idea. Why we do not practice this type of installation.

So what ends up happening, you end up splashing. You can see how wet the foundation of that house is in that picture. There’s so much splash when you do this. So you have a downspout and it doesn’t matter how you set it up, you’re hitting this great water splashing everywhere. So, you’re not accomplishing what you want. And that’s to capture all the water, keep it contained, and take it to a location at discharge.

So then they offer this, it’s ramped and it’s supposed to be angled so that there’s not as much blush on the house. Still a bad idea. And I’ll tell you why. When the waterfalls and you pick up speed and you pick up your velocity, your downspout system is a gravity-powered system. Hydrodynamics is fluids in motion. So why do we want it to slam into this catch basin and stop? All that momentum. All that push guys want to talk about push — how you flush the debris through the pipe. Well, don’t do this for one because the water just comes to a stop. And how in the world is this going to catch debris because guys will cut this and then they’ll put the pipe inside and say, well now it’s not splashing. Well, now you don’t have continuous flow. You lost all your pounds per square inch because the water comes through here with such force, when it’s coming down a continuous pipe the way we run it, you end up with good velocity, good pounds per square inch. You’re pushing to debris. You can force this out through either a pop-up or if you want a basin. I use both, depends on the application.

Now I watch what you guys are doing on youtube and I can explain what some of this is about. All right, so I didn’t have a 90 because I wasn’t going to go run and buy parts for the video. This is a, a clean out T, you know, sweeper. It serves the purpose. Now to get this is. This happens to be scheduled 40, but any PVC pipe for this demonstration will do. So you got your SDR pipe now to slope it. So you go ahead and you raise this to get a slope. Well, watch what happens. So you’re up against your house, you go to slope it and you got this pipe that’s away from the house. It looks nasty. So what do the guys do? Well, he cuts the lid so that he can put this pipe through the lid. Now he can cut, he can cut a bigger hole in the side here or even use that and that pipe now can bend on a slope. So he’s using this because it’s, it’s giving him the ability to get the slope he’s after out of a hard pipe.  And then he can keep it tight to the house. But here’s the problem. The water comes down this pipe and it crashes into the space and you’re not catching any debris. There’s so much turbulence and you’ve lost all your velocity and the PSI drops drastically.

Now the way it works without getting too Geeky, the heavier the rain, the more water you put through this pipe, the higher the PSI. I love a good heavy rain because it blows the debris out. Usually, the way my systems are made with one continuous pipe, it blows the lid right off these NDS catch basins at the end.  So no, I don’t put these up against the house so at the water can hit this great and splash all over and you end up with water against the foundation, which is exactly what you don’t want. No, I don’t cut a hole in the great and put the pipe in because now it’s just slamming into the bottom of this catch basin and you have all this turbulence and this waters this swirling and yes it finds its way out, but now you’re starting from ground zero. Here you had this really, a really nice flow of water, this continuous water in motion.

When people talk about velocity and keeping up the velocity and building up pounds per square inch and building up that pressure and they started talking about the push out of the debris and then they’d go ahead and they use a basin right at the foundation of the house for the water just basically ended up at a stall. The water comes crashing down and now you’re kind of starting from ground zero again and starts flowing out the pipe. Sure, if you pitch it, the water’s going to exit, but I like one continuous pipe. The water starts to fall. It’s building up speed. You reach a velocity, you reach a certain psi.  On a moderate rain that’s what happens now on a heavy rain, the velocity will actually be a little slower because of just the drag and the friction trying to push more water through, but the PSI greatly goes up. It really is amazing.

So, my channel is not about being a mathematician and yes I know the different formulas. Yes. I’ve calculated all of this and yes, through the law of physics and the knowledge and numbers that are provided to us here is the common sense to do you put a catch basin at the foundation of your house? No. The answer is clearly. No. It’s a terrible idea. It’s a bad idea. You’re not containing the water. You’re not gaining anything.

So, you watch this channel because you want the truth. You want to hear the opinion of somebody who’s been doing it for more than 30 years and I know that there’s all kinds of different takes out there and I’m not poking fun at anybody. I’m not knocking a product. I’m not. Everything has its place for sure, but I don’t like to see the DIY guy watch these videos. I think that this is the way to go and I have, I have to be a whistleblower. I have to be the one that puts up a video and says, hey, it’s as simple as this guys. We got a gravity powered drain system here and we’re not going to just slam into a catch basin at the bottom or a great and spray water all over the place. We’re going to keep it on one continuous pipe all the way to the catch basin or pop up. That’s how you want to install your downspouts. You’re underground downspouts should be ran with one continuous pipe.