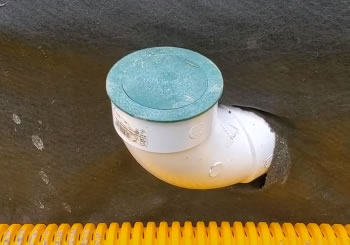 So what we’re doing here, and I’m not going to get into this part too deep because I don’t want to send the DIY guy too far down the rabbit hole. But we have our Baughman 8-slot premium yellow along with our Baughman 4-slot staggered and that is in their Select. So we have the Select, which I don’t stock for the homeowner. In the DIY category, those hundred-foot coils we ship you guys. We have the Premium 4-slot staggered and the Premium 8-slot. I keep 250-foot rolls in the yard for our landscapers. And a lot of them request the Select. So the Premium, it’s the next step up. It’s an all virgin material. As you’ve been taught in previous videos, it’s pure virgin material has a lot of strengths. So I don’t mind the select in the 4-slot staggered cause there’s not as much and let cut.

Now, this is what we’ve been doing for trees and Chuck from Apple Drains, he gets a kick out of this. We went ahead and we don’t want the water to collect in here. So the guys did an amazing job of creating a perfectly level trench so that there’s no water that’s going to be stuck over here by this tree. And what we do, NDS and you guys can Google this. NDS has what’s called a root barrier and you slip it in along the side of the tree. So the roots come out and then go down. Well, I feel it’s a failed experiment because you want something that also keeps the roots from coming back up and into the system.

So what we do here at French Drain Man, is we take a culvert pipe and then we just take a saw and cut the top off of it. So now the water can still, the surface water can still go in the system. But as you can see, it’s just absolutely impossible for the roots to get in. It doesn’t matter if they try to get in from the side. If they try to go up and under, they’re going to get absolutely nowhere. So this is going to get filled with our screened, washed gravel. And then it’s a double barrel system. We go to schedule 40 under the sidewalk. That’s a sprinkler line right there.

So there are a few elements here and that’s why I wanted to show you guys this. You know, as simplistic as this drain may appear, there are so many things that were methodically thought about. Now, never, ever hook your gutter downspout directly to your French drain. If you tie this into this pipe with a WYE coupler or a Tee coupler. You always want to use the WYE couplers when you’re trying to keep water flowing. But in any case, you don’t want to do it because you’re going to get leaf debris and shingle gravel that come out of the gutters.

Now this is just going to pop up when it rains and there’s going to be grass around it and the water is going to run through the grass, through the stone, into the pipes. So this is a natural way of filtrating the roof or enough water so that it doesn’t put contaminants in your French drain system. So keep that in mind. DIYers. That’s so important. That’s one of the biggest sins I see in yard dewatering. So keep that stuff separate and isolate it from one another.

So you see two pipes, a double barrel system. You see what we’re doing to protect against the roots. And there’s a method as far as what you pick for the pipe. Not just in strength but in how much water you want to move. Now again, I don’t want to give you too much to digest and all in one video here, but keep in mind the side is going to drain out before the back. And that kind of frustrates people. So you know, this is like a park. I mean this is, this isn’t, we’re in Macomb Township and Macomb County, Michigan. Look at this beautiful, my God, gorgeous. Just like a golf course.

So when you have this large property and then sadly you inherit like the neighborhood pothole and it happens to be the size of a small lake. You need to be geared for that. So what happens is the water, that all come into the side lot, it actually empties out first because once these pipes are full, the back is just kind of waiting. It’s waiting and waiting for the side to drain so then that water can move. So hopefully you understand that. Trying to explain it the best. I know how and the 8-slot is going to grab up the water much quicker than the forest slot. So the 4-slot is not going to fill as quick.

So down the line, over more area, it’ll actually collect. Again, homeowners, they really want this stuff gone and they want it gone quick. Literally, if we get a flash flood that’s two and a half inches and they look out their window while the rain is coming down and they see a puddle, I get a phone call. I got to build these systems to evacuate the water immediately. Period. They don’t want to see the water. Now I can’t make it evaporate on contact, but I can build the best system that I know how so that can move it quickly.

The longer the water lays around, the more saturated the soils become. So people are really amazed. They’re always talking about our systems. They’re so impressed because their yard goes from spongy and soft and all of a sudden we build a system that removes the water immediately so the clay doesn’t get to pudding, you know, to where it’s really the lawnmowers or stuck and things like that. Everyone says clay doesn’t have any percolation. Well, it has some, if the water’s left to lay there it turns into quite a mess as we know. So if you evacuated immediately, the yard just stays.

I mean this clay here, once the system’s been in place and we get some warm weather and we get this, this yard to harden off and we refer to that once in a while you may hear me say cementing it in it. It takes warm weather to do that. We have to have it cement itself in through what is our drought season, which is July and August. And then with this system in place, it’ll never, ever reach or see a saturation rate as you see here. Like I’m walking and I’m sinking. You know the guys are working on the plywood because you just sink to your ankles in this stuff. It’s so bad. So they couldn’t mow it and they got a weed whip it and muck boots. And you know what? Those days are numbered now. Now, this system’s in place. This is the last Spring that they’ll see that way.

All right, well, the comments are open. If you’ve got any questions, please ask, ask away. We’ll answer as many of them as we possibly can. We appreciate you guys. Thank you for all your support.