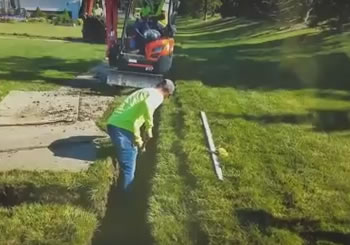 In all our videos we’re always comparing a trencher to an excavator. Here’s a picture of a trencher tearing up the grass, ripping through all the sprinkler lines, and just creating a very, very small groove to put a four-inch pipe in.

Here’s another picture really showing just how big and how wide the trench is. So by the time you put a four-inch pipe in that trench, you might as well just go to the store, fill your trunk of five bags of pea stone just pour some pea stone on top because that’s all there is room for. Now, that’s why in all the videos, you hear the comparison, trencher to an excavator. One-third of our installs we are replacing failed systems that we are putting with trenchers. That is a staggering statistic.

Do it right the first time. We take an excavator, not a trencher, an excavator. You can see the gentleman standing in the channel that has been excavated. You can see the excavator. It’s literally scooping out the dirt. We cut the sod off and put that off to the side with two and a half inches of root so that we can place that back so the sod is not all torn up such as with the trencher. You can see a nice deep trench. We line the entire trench and then fill it full of stone, that’s going to move water. That is going be a French drain that lasts. These French drains that are installed with a trencher, they don’t last, a couple of years tops. And they don’t work very well even when they were in their prime. Their expiration date is, from what I’m told, the homeowners tell me they worked a little bit in the beginning.  And a little less, about two years they were done working altogether.

Look at all that stone. Look at how thick the sod, that we’ve cut out, with two and a half inches of root still attached and we put that off to the side. Once this drain is complete, we just go ahead and put that grass back over top. You can hardly even tell we were there.

I Want a French Drain Installed Right The First Time!