Do NOT wrap a French Drain Pipe With Drainage Fabric

Do NOT wrap a French Drain Pipe With Drainage Fabric 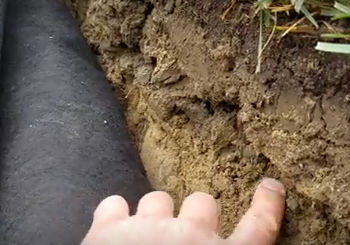 I want to talk a little bit about the pipe we use, the fabric we use, how we use it and why we use it in the way that we use it. So a lot of guys are just wrapping the pipe and then they’ll put the pipe in and the whole their stone in. We don’t do that. And I’ll tell you why.

This subsoil right here, if you just pour stone, let’s say we just wrapped a pipe right there, or you have a pipe with a sock on it and now you just fill this in with stone and you put the grass back over top. This subsoil mixes with the stone and the stone migrates into the subsoil. It plugs here. The system plugs here. So, to have a pipe with a sleeve or a sock on it, and I even see guys that’ll take drainage fabric and wrap the pipe, it’s a really bad idea. That’s not the right way to build a good French drain system.

So, for a French drain system, never use the pipe with a sleeve sock on it. Don’t wrap your pipe with a filter wrap because you’re going to want to wrap. You need a soil separator so that your stone and subsoil don’t mix and it and it’ll plug here. What good is having a pipe that’s not plugged if you can’t get the water to it? So we wrap everything. This is a soil separator, will have the stone and pipe and we’ll wrap it all.  That’s how we do it. That’s a philosophy on how we build the drainage system and it works. It works really well over 30 years and there’s not one that’s failed.

Now, another question, people say, well, you’re putting your pipe right on the fabric. Yes, I am. This is not a pipe where you just have a couple of holes at the bottom. This has eight slots per valley, so it’s going to take in the water from the sides, from the top, and because I have the fabric, I can lay this in the trench. The reason why I like laying the pipe right on the fabric, we take this to a storm drain catch basin. We want to empty the entire trench out. We’re here in the north. During our freeze, we could end up with water freezing that’s laying in the French drain trench. If you just raised this pipe up a few inches and put a bunch of stone under it, you lay it on a few inches of stone and then you go through the sidewall of the storm drain catch basin or a sump pump basin or lift stations. You see through our videos, all the different things that we build. You’re gonna leave water in the trench. I want the pipe at the bottom. I want to drain the entire trench out right up until the location of discharge so that it doesn’t freeze, come wintertime. That’ll hurt the performance of the drainage system.

So, to answer some of the questions that some of the comments and questions that I’ve been receiving, definitely always use a soil separator. Don’t use a pipe with a sleeve or a sock on it, and yes, once you have your entire trench wrapped, you can put your pipe down. If you’re using corrugated pipe that’s slotted, you got it. Doesn’t matter if it’s three slots, four slots staggered. In this case, I got the eight slots per valley. If you watch the videos, you guys know I really like this pipe. Use it whenever possible because it really moves a lot of water.

For a French drain system built right the first time in Shelby Township, Michigan, give us a call at 248-505-3065.