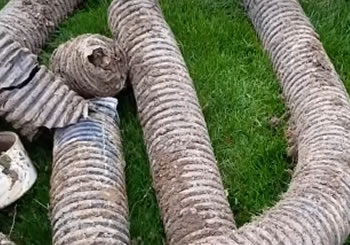 Welcome to the French Drain Man Channel. We’re on a job site in Macomb Township, Michigan. This is a system that was put in years ago and they didn’t use a non-woven geotextile fabric and what they ended up with was all the stone migrated into the clay and the clay migrated into the stone. You know the pipe wasn’t completely full of dirt or anything, but because they didn’t wrap it and fabric… If you can’t get the water to the pipe, it doesn’t matter if it’s, I mean there’s definitely some dirt in this pipe, but you know, again, that’s not what took it out of the game here. It was the fact that they didn’t use good fabric. Now the fabric that we use is really, really strong. We cut this with a razor blade so we do use a box knife.

Now a lot of the questions that people are asking about the fabrics, you know, I’m going to try to answer some of the DIY questions right now. Is there a right or wrong way of putting this down? No. The water will go through it, no matter, there’s no top or bottom, you can put it down in, either way, it doesn’t matter. So that’s what’s neat about this. It’s bulletproof. It’s absolutely bulletproof. The stone has been another thing that you know, I’ve been getting a lot of comments about. So people are like, what kind of stone do you use? Well we use a 6A natural stone and it’s washed and it’s screened so it doesn’t have any dirt in it. So we want to build a fully contained system with no contaminants. We want to start out with the very best product.

Now which one is more important to wash or the screening? The process that’s most important to me is the screening. So I like limestone. We build a lot of them out of limestone. And I’m gonna start showing you more stuff this summer. There’s been a lot of systems that, you know, it’s just hard for me to, to make time to do these videos and all the estimates. And there’s a lot of things going on here at a French Drain Man.

So, and now the pipe, you know, you guys ask a lot of questions about the pipe. Everyone’s like, do you put it right on the fabric or do you put the stone under the pipe? We don’t, since we’re using the fabric, the non-woven geotextile fabric, we can set it right down on the material fabric. And that way you don’t end up with clogging. And what’s nice is when it rains and the water pours into the stone and if we’re having a downpour in this trench fills up, there are eight inlets. So the water, it fills this pipe all the way around.

Now, this is the pipe currently with the most inlet. Now everything we do in yard drains, we’re using materials from the agricultural manufacturers. They sell so much more pipe to the ag then they do to the residential that was just like a real, you know, a small sliver of the pie. So what Bachman did when they came out with the eight-slot, they, they wanted to own the rights to the pipe that had the most inlet and they pushed the boundaries. So they made a really, really strong pipe and they made really wide cuts, sets three 32nd of an inch and they put eight of those inlets in each valley giving this pipe, 11 and a half inches of inlet per foot. So that is just screaming. So they really pushed it hard. They measure on the inside of the pipe and this is three-quarters of an inch on the inside, not the outside. The outside would actually measure a little more but and because of just the very nature of this material, they vary slightly so you can see this monster inlets and we this love this pipe.

Another question I’m getting is does the yellow come in a dual wall? No it doesn’t but you don’t need it if you’re building it the way we do, we build it fully contained so contaminants can’t get in and as long as you’re doing that, as long as you’re wrapping it with this, this non woven geotextile fabric, you don’t have to worry about moving to debris.

Now, I know with the downspouts, we like to use the dual wall solid for downspouts. And the reason for that being is shingle gravels pretty heavy and it’ll get caught up in those riffles. So this being a different type of system, we’re filtrating the water as it goes into the French drain. There’s going to be no contaminants that are going to get into this pipe whatsoever. Nothing’s going to flow through that pipe except water. That’s it. Water. There is not going to be any debris, not the way we build it. And honestly, you can’t really use a wrong stone in my opinion, as long as it’s screened. If it’s screened down and washed, great. But make sure it’s screened. You know, I’ve seen where are you going to a landscaped yard and they’re loading a crushed stone. Watch your crush stones. And I’ll tell you why the crushed stones have fines in them and those fines, That believe it or not, settles at the bottom of the system and it does take a little bit of your volume away. I see these videos where they’re loading and you can see the dust blowing. You can see, well obviously if you see dust and small particles, I mean, you know, it’s, there are too many fines in that for me. So anything that’s screened and clean of small fines and debris is acceptable. But this is a 6A but I like three quarter and one-inch limestone. When I need to have a rip-roaring drain, we’ll either use a cobblestone or we can go to a one to three-inch limestone. The bigger the voids, the more water you’re going to move.

So this is in the collection area, this yard, it was crazy wet over here on the side of the shed. So we ran our French drain system right in the collection area. Always, always put your pipe at the lowest point. And if you got any of what we call potholes in your yard, make sure you go up with a feeder pipe and you know, get it in that pothole. So that’s a collection area. You want to drain those potholes. So you don’t need to be bringing in dirt and filling in all these holes. And grading and chasing the water all over the place because now it’s harder to gather and harder to contain. So I love the low lying areas. I love when there’s a swale or potholes in the yard, and I can just go right through the low section with the pipe and evacuate the water swiftly, quickly so you don’t get that, that saturation of the subsoil. Keep your yard firmed up.

So just some pointers to the DIY. I know we got a lot of people that are asking a lot of questions and I’m going to keep giving you answers for all those questions. Thanks for subscribing. And until the next video, peace.