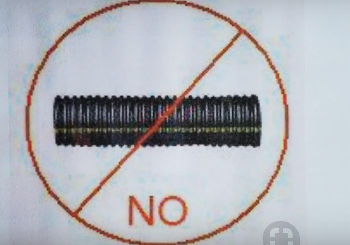 Today we’re going to set the record straight on corrugated pipe. For years and years, I’ve been seeing this picture shared. Now I understand that the public and the average homeowner doesn’t know the difference between the pipes. They hear a couple of things and then they start sharing it and I love getting on these multimedia sites and having a lot of fun seeing what you guys put together.  It really entertaining at times, but uh, in truth you guys come up with some, some really, really cool stuff and somebody needs to address this here because nothing could be more misleading and nothing could be further from the truth. So let’s go over corrugated pipe.  The 101 of corrugated pipe. Let’s go through it.

Oh, okay. So here is a skid of 20-foot lengths of corrugated pipe. Wait a minute, wait a minute. I mean, according to that picture and, and what I read, they’re always criticizing the pipe because debris gets caught in the riffles, valleys, ridges that these pipes have. This is a dual wall and nobody is talking about it. Nobody. So I figured it’s time that somebody sheds a little bit of light on it.

If it’s smooth wall you want. And if you want the structural strength, you need the crush rating, you just go up to a dual wall. So this is in just about every size you can think of. We have it in four, four-inch, six-inch, eight-inch, 10-inch. It also comes in, perforated. This here is solid.

So, I know the next thing that you’re going to wonder is, okay, so it’s stronger, but is it a strongest PVC pipe?

I parked my one-ton truck up on this 20 footer and it’s a section of dual wall and the wife called me and needed me up at the house and I got sidetracked a little bit long story. This truck spending up on top of this piece here for about three hours. When I get done with this video, I think I’m going to change my oil. You can see it’s holding the truck up just fine. The front of the truck has the engine in it, so there is a lot of weight on that pipe. That pipe is holding its own, that’s for sure. So you can see the tires buckled.

All right, so let’s move on. So now we took care of that problem. You know if you want a pipe that’s smooth wall. Corrugated pipe does come and smooth wall.

Now there’s a lot of different pipes available and I think that’s where we lose the average homeowner, the average consumer. So let’s just go over it real quick.

The picture shows a green stripe on that pipe. Well, that’s the trademark for ADS. Advanced Drainage Systems makes a fine product. There’s nothing wrong with it. It’s what is in all the big box stores. The Home Depot, that’s what they carry right there. This is the perforated. It’s a three slot staggered and that’s by ADS.

Okay, so there’s nothing wrong with it and whether it’s in perforator solid.  And if it’s run correctly, you don’t need a smooth wall. That’s going to be something that I’m going to go over and another video I just want to go through the corrugated pipe choices. Try to help everybody out with it that.

If you watch this channel, you know that the eight slide is one of my favorite pipes. There are eight slots per valley. That pipe has eight, 3/32nd-inch cuts in it. It’s got eight, 3/32nd-inch cuts in it. That’s how wide the groove is. I like it. The ADS pipe, it looks to be a 1/16th. I preferred to go up to an eight or four slot and I want it to be bigger, so that’s why I go to the 3/32nd cut, so eight per valley versus the three per valley.

Now if you want a little more strength because whatever you’re building, whatever you designed, you feel you need more strength, it’s going to be more commercial. You’re going to drive semi trucks through this yard. In that case, well then you want your four slots. Why are the four slots stronger. Well, you just, you didn’t remove as 6.2 points two square inches per linear foot of inlet. By the way, the eight slot that we were looking at earlier, that one held up to the light. You can really see all the slots that have 11 1/2 square inches per linear foot of inland.

Now I’m going to show you an old-school pipe and I don’t use it. It’s known as pinhole and pinhole has been around forever. The only reason why they’re still making it is that it’s been around forever. The old-timers are stuck on it. It’s since then been replaced by other pipes that are found to be better performers. I don’t use it.  Now for a yard drains. I would never use this pipe. I want to also make a point that all corrugated pipe comes from the agricultural community, so you’re a little hundred foot roll that they’re buying or you’re buying at home depot. They distributed home depot. That isn’t how they make their money. They sell the roles to the farmers in 3,400 foot rolls. Yeah, it’s insane there monster roles.

So on a farm calls for an order, guess what? The residential market, it falls at a distant second because for us to use 3400, feet of pipe and it’s coming on a semi and it’s more than one role when they’re doing an entire farm. So all this pipe, it comes from the agricultural community, all of it. We’ve adapted this material to make great drainage systems in our yards and in commercial properties.

Now this is the product that’s replacing pinhole. It’s called knife cut and the slits are so small you probably think this pipe is solid, I would assume because it’s usually really hard to see the knife cuts really hard. Yeah, there’s some right there. It’s been told to me by very good sources that the pinhole, it was designed for sand and the problem is sediment gets in it where knife cut performs better in sediments, soils.

And then we have the solid single wall, not dual. And this is really nice to work with when you have to go around an AC unit. There are different times where this is really, really helpful. And then back to our dual wall. And again this comes perforated. If you don’t want it in solid and you want to put perforated pipe, uh, that’s dual.

Now. Anybody who’s building a French drain, if you watch my videos, you can see that it doesn’t matter if there are valleys, no debris gets in my systems because they’re fully contained. The guys that build lousy systems with inlet basins, and if you watch my videos, we’ve covered all this and we’re going to cover it again. Now when you need to go up to a bigger system. This stuff, all of it that I showed you, it all comes in the big boy materials, a six-inch, you know, six, eight and that stuff really moves. Water really screams. We use six on occasion. I’ll try to cover more of that. I have a lot of really informative videos in the future. I’m kind of try to take this to the next level.

We, I’m pretty parochial the last couple of years and people are asking for more people want more and I’m really disappointed in some of the other drainage channels. They’re misleading the public. It’s almost as if they told a lie and they’ve told that their whole career and after 30 years of telling this lie, they got to keep telling it and instead of just saying, hey, through technologies and innovation and experience, you know, we moved down to this and this is why. So, you know, I guess if the industry needs a whistleblower and somebody’s got to expose them for what they really are, I’m more than happy to do it. But again, share this video. Don’t share that picture because that picture is shared and passed around so much and has been for so many years. And the only thing I got to say about that is it’s just because people, people, nobody’s out there educating, the public is the problem.

Nobody in the industry is taking the time to educate the public. They see it, we roll our eyes, we move on and you know, I’m going to start taking the time to show you different products. I bet you never even knew about this dual wall. Most. Who’s going to view this video because they’re gonna look up corrugated pipe, one, one, whatever ended up titling it. They’re going to realize, wow, I didn’t know I could buy dual wall. Working with this is so much better than working with heavy wall of what we, what we will call our resin pipes, the resin pipes, you know the PVCs. They’re hard to work with. If your grade is and you have a lot of obstacles. No, this is a 20-foot dual wall piece. It’s pretty rigid, pretty strong as you can see, but it still has flexibility. I mean that’s what’s nice about that pipe. I could still, I could push down on that pipe and I can influence it to go around a slight bend or down a slight grade where the resin pipes, you can’t. You’re putting. Well, they have 20 to 45 slash 60 and a 90 degree bends elbows for those resin pipes. They don’t have anything in between those sizes. So it’s, it’s really difficult to work with and it has its own problems. Literally, it’s a video for. It’s. That’s a whole nother video. Commercially heavy commercial. The PVC and schedule 40, so we do commercial drains with that, but this is a light commercial and a heavy residential drain right here.

So for more about drainage materials and the truth behind building yard drains give us a call at 248-505-3065. Be sure to visit the French Drain Man YouTube Channel and subscribe.