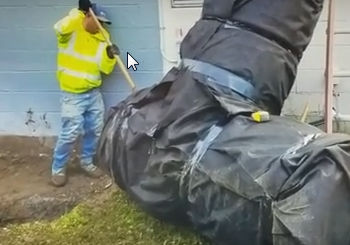 We recently installed a cistern. It’s a hybrid system actually, it’s a cistern dry well.  It was behind a building that was 80-years old and water collects behind the building. It’s like a bowl. The video got lost, unfortunately. We had some video and I was going to present to you a video, but I have some still photos and I’d like to explain to you what we did and how it worked.

We make our cisterns and in this type of install, this was a hybrid system. This was a cistern dry well hybrid. Instead of a rain barrel, something that’s going to be unsightly or you just don’t have room for, you can put these under the ground and you can build them to hold thousands of gallons opposed to just a 50-gallon barrel.

We went ahead and took the cistern and that we made in our shop and we dug a really deep hole behind this building. And we lined it with filter fabric because we’re going to put a bunch of drainage stone around this cistern. And it’s going to collect a lot of subsurface water as well as surface water. So this system was designed to do both.

Once we finished they could pour concrete parking lot behind here and they’d be fine. We have a storm drain cast iron. The grate is what we referred to like a spider web, honeycomb. These work really well and I want it to be safe. So I wanted to go with something really heavy, something a child couldn’t lift up.

Now when this overflows, there is a pump system and I’ll get to that in a moment. We filled the area around the reservoir with 4 – 8″ cobble. This is going to also increase the capacity. Again, this is a hybrid. This is a cistern dry well hybrid. And then we have our drainage stone that you see in all our other videos.

When it hits overflow, there are two pumps. The overflow pump, because it’s like a bowl behind this building, actually lifts the water and you can see the pipe that we installed at the top of the building. And it takes that water to a downspout.  Because it’s like a bowl in the back, there’s no other way to get the water out. Once we get it to the front, there’s not a lot of elevation. There was nowhere to really pump the water to, but there’s a slight grade away from the front of the building and it ends up running down the shoulder of a road into a storm system.

Notice the shape of the cistern. We put a false floor midway up. So where you see the stack, there’s a pump that goes to the bottom so that you can use the water in the cistern. And then there’s a second pump on a false floor. So once you fill the cistern reservoir and all that large cobble, that’s part of it as well, it’s going to hold thousands of gallons of water. Now during the rain event, we want to make sure that we don’t flood. Originally water was finding its way into the back of this building. The pump that we have will lift the water. We have a pump in the bottom here and that’s for the water, for the lawn or washing cars, things like that. Then we have a pump sitting up here on a false floor.  That is so as this continues to fill, that water is then pumped to the front of this building.

I wish I could have preserved the video. Unfortunately we lost the video, but hopefully, this helps. If you’re looking for a cistern, an underground reservoir for rainwater and you’re looking for installers in southeastern Michigan, give us a call at 248-505-3065.