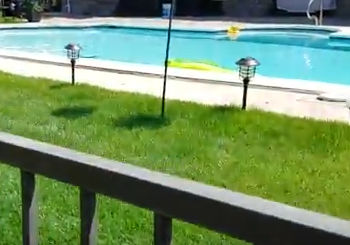 The water from this backyard is supposed to run through the neighbor’s yard, and then there’s a storm drain catch basin in that far corner. Well, in the process of this tree lifting the ground, it’s raised a swale area and the water can’t find its way. They also have a couple of big dogs and when they come into this corner, they run real hard and they’ve banked up the dirt. That’s creating a damming effect. This homer’s frustrated. We’re going to basically build a system that they can control what’s on their property.

The other problem is the neighbor built a pool and built the grade really high. This happened years ago. If this happened recently and they wanted to go to the Township, their neighbor have you paying for the French drain system, I can tell you that that’s how that works. So you got to retain your own water.

That fence, that property line, that should be the center of the swell. Now, the homeowner that I’m working for, they really had their act together. They even put their landscape off the swale. You can see this role of privacy arborvitae. These are off the soil, so their drainage was finding on their own property. Their neighbors caused their drainage issues. Sadly, there has been an attempt made here. There’s pea stone there. We just cut off the top with a sod cutter.

We’re going to go against the grade. I’ve done this quite a few times and I’ve never shot a video of it. Just want to show you guys another way to get water out. Basically, this basin over here is 16 inches higher than that corner, but I’m going to take the French drain to it. We’re going to be crazy as we’re going against the grade, but this way they’re controlling all their water. Their system is in their own backyard. As you can see, this is downhill, but we’re going to take all that water that you see standing in that corner of the yard and bring it to this basin by coring through the side wall of the storm drain catch basin.