Can a French Drain Take In Gutter Downspout Water?

Can a French Drain Take In Gutter Downspout Water? 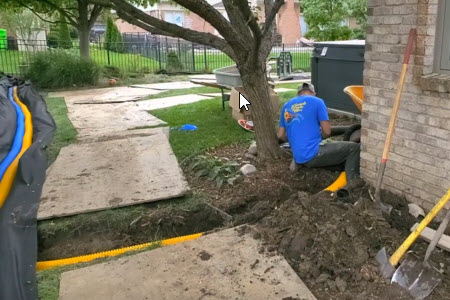 All right, so while Marcello takes care of the strap on the gutter downspouts and trust me guys, when you go to these jobs, not all the gutter systems are in the best condition. They’ve had all kinds of crazy things done to them. So, Marcello, he’s over there doing a repair so that he can make the connection and you know it sucks because it had nothing to do with us.

All right, so this is a solid run of yellow, the premium. It’s solid. Guys, it’s not perforated, no perforations. So then we got the High Octane giant inlets and then we go over to the Baughman Premium solid downspout pipe.

So we’re running gutter water. Everyone’s like, how far do you run the buried underground downspout system? Well man, don’t play games. Get the water the heck out of there. So as you can see… We’re getting the roof runoff water is a separate system from our French drain system, but we’re going to go ahead and we’re going to put a pop up right here. And then once we get the burrito wrap done, we’re going to have an open French drain back here. That’s just going to scream and when the water comes out of the pop-up, it’ll just run through the stone into the French drain system.

A lot of people have commented, will the gutter system with a roof runoff system, the underground, will it overwhelm the French drain? Absolutely not. That tap can take 240 gallons of water per minute. That’s a lot. That’s a lot. And this is an acting reservoir if indeed it did back up, but I just don’t see that happening. I mean sure we’re getting water off that pool deck and a lot of this water next door, you know, they end up inheriting.

Now here we’re going to do a cover drain so it’s going to be an open French drain across the back, cover French drain down the sides because the dogs don’t seem to run up and down the side as much and we’re going to tie in all the, all the downspouts with the Virgin material. That way you don’t have to worry about animals digging this up, chewing on it seems like for whatever reason, varmints, rodents, they like that recycled material. It’s made out of restaurant containers and you know, food containers.

The bigger the stone the bigger the voids. Do you see all these shadows? Look at all the voids in this big stone. So, hat’s inch and three-quarter cobble. Now they don’t wash it anymore. Notice how dirty it is. We can’t get, we can’t get washed stone anymore. I mean, they don’t want to pay for it. It hurts the bottom line. And I think they just all got together somewhere in robes, smoking pipes and had this talk because you’re not gonna find wash stone, period. I’ve been talking to guys outside of Michigan, everywhere. This has become a new standard, no wash known. So Marcello’s got his.

connection bound teens packing the dirt on it for him to keep it in place. This thing’s never gonna go anywhere.