Biggest Mistake Made to Cause French Drain Failure

Biggest Mistake Made to Cause French Drain Failure 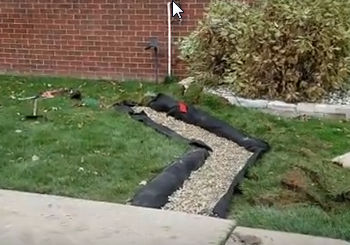 Most yard drain systems are installed because of surface water first and foremost, and then subsurface water secondary. That’s most drainage systems they call you when they see surface water and they’re frustrated and they want to do something about the surface water. Their dogs splashing in it, their children are coming in muddy and when you have surface water and it takes a long time for it to evaporate, it does really make that area hard to mow. So never put the dirt back in. That’s one of the biggest mistakes I see drainage contractors making.  So he took all this dirt out. We put it in a drainage system. None of that dirt is going back in. If you’re putting the dirt back in, you’re compromising all your hard work, all your money spent.

So you fill the entire French drain with a good wash rock. You want a good clean gravel, there’s no better drainage system. Data, gravel drain, there’s no better drainage system. You can’t beat this. So with the gravel coming right to the surface and then this is just going to get a burrito wrap. It’s known in the building industry as just given it a Burrito wrap. It’s going to be 100% fully contained so no contaminants can get in. It will never need maintenance or cleaning, and then the sod will grow over this just fine as long as you take enough root.

Now,  the water will run right through that turf grass, right into the gravel and all the way to wherever you’re taking the water. In this case, we’re taking it to a storm drain catch basin.  But never put the dirt back in. When you excavate dirt, get it out of there.

Even that Easy Flow by NDS, by they tell you to put a permeable soil type on top of it so that it can still take in surface water and nobody does. When they’re using that Easy Flow by NDS, they’re putting the dirt that they dug out right back on top of that beanbag of a French drain system. So now you’re not letting the water get to the drainage system. It’s just a really bad idea.

So I just want to break down the 101 of what makes a good French drain. Never put the dirt back in the dirt is why you’re building a drainage system 99 out of 100 times to begin with because it has poor percolation. If it had good percolation and it was worth putting back into the drainage system, you probably wouldn’t be there.

for more tips and tricks about yard water, drainage, subscribe. Have you ever looking for this service and South Eastern Michigan, give us a call at 248-505-3065.