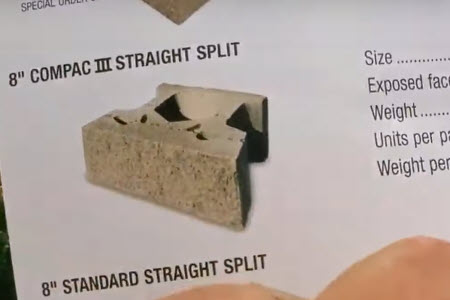 I know you guys see this big block that I show a lot of our custom drains. You know when people have a beautiful house, beautiful lot. It’s in the school district that they want their kids in, you know, just on and on and on and on. But the yard itself is the problem. Like we have to do some heavy modifications to the grade. We’ll go to this big block and we’ll do all kinds of really cool stuff with it. So I wanted to share this because I’ve got so many young contractors calling me now and talking to me.

Guys, you really gotta try this out. This one right here, the eight-inch compact, me and Scott, we, we love this. Now the standard is the split aggregate and that’s where they make two of these blocks as one unit and then put it in a guillotine, crack it and it splits the aggregate and then that gives it a nice look, kind of sparkle.

Now, if you’re not for that kind of look, they also make this block in a smooth finish. This block is 86 pounds that we’re using. Think about that. 86 pounds and it’s fiberglass pinned together so it can, it can move. The freeze and thaw can, can work on it and it’ll move back and forth on these fiberglass pins that we put in.

You’re going to see this in all our builds. Me and Scott, we use this exclusively because we’ve been disappointed and just let down by so many other blocks. I can guarantee you guys, if you build walls and lifted patios out of this stuff, you’re not gonna have any callbacks. This stuff doesn’t move. They build bridges out of this. I’ll try to, you know, stop on one of the expressways around here that has that at literally overpasses and bridges made of that.

We’re going to power wash this brick veneer. It hasn’t seen the light of day in 20 years, and it’s gonna look about a day old when we get done.

All right, guys, until the next video.