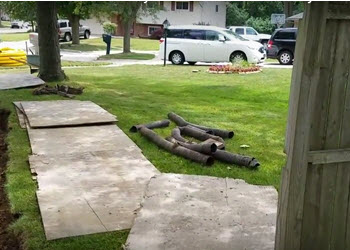 We’re in Auburn Hills, Michigan installing a French drain system. This system’s pretty big, pretty elaborate. I’ll tell you what happened here. The grade is higher in the backyard. So basically, the water runs in this direction towards the house. It used to be pitched that way and then out down the side of the house.

I’ll tell you what’s happened over time. This is a mid-century build, we see this a lot. You can see where we’re lining the trench for a curtain drain that we’re going around the house with so that it catches all the water. And we actually are running a channel to the street, down both sides of the house, we have a French drain channel full of stone that’s going to evacuate this water.

There’s been an attempt made for drainage here already. The roots basically stopped their progress with that. We were able to get through the roots, we have the equipment, we have the tools to put in a French drain system where there are large trees, where there are very large roots and have success with it.

For More Information on a French Drain / Curtain Drain in Auburn Hills, MI