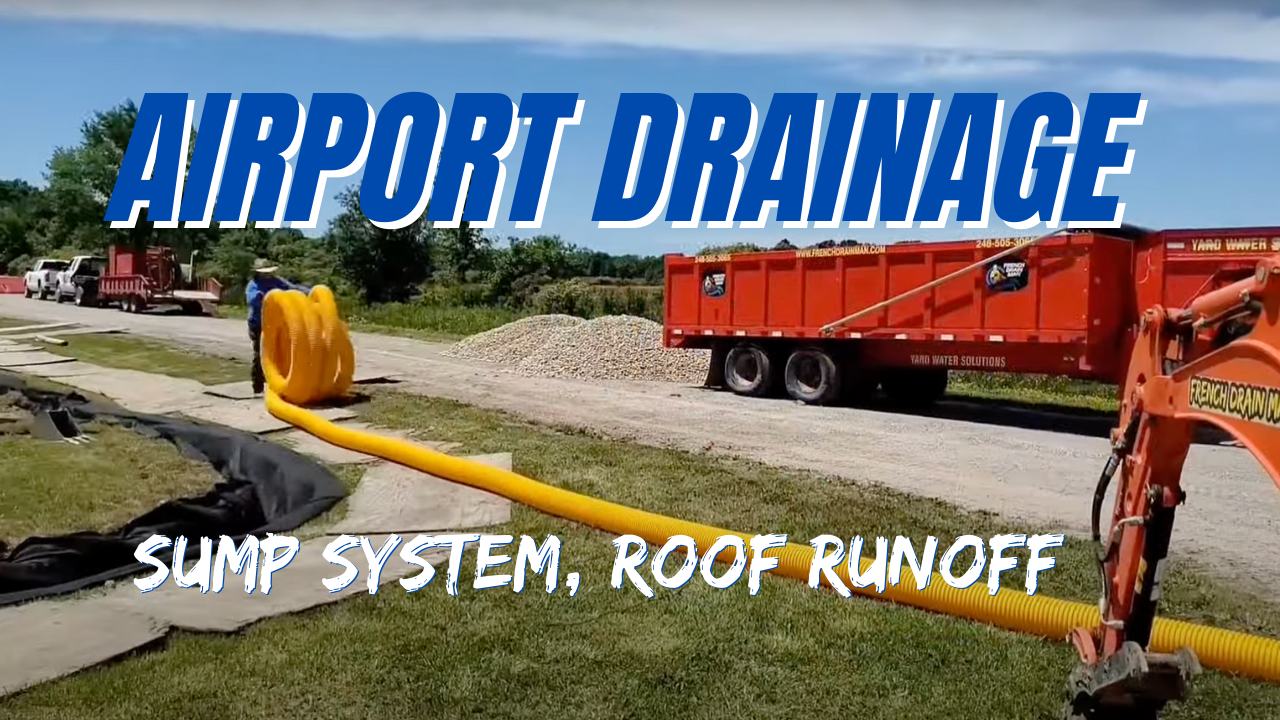 I’m going to take you along on an airport drainage installation that we did. This airport was so flat, the drainage was so bad. To make matters even worse, the ditch that they did have literally was a ditch to nowhere. So once this ditch filled up with water, all these airplane hangars would just end up flooded. As you can imagine, the owners of these hangars they’ve just had enough and it was time to do something about it. We’re going to put in a Bad Seed Sump System, Full Frame with 20 feet of additional chamber. I’m not messing around here. I know the kind of water we’re dealing with.  We have so much water coming off acres and acres of airplane hangars. And we’re basically going to have to pump this ditch dry and get this water to the other side of the street where there’s another ditch.

The dig as you know, is tedious and that’s like the longest part of the install. We did that in the morning. So here it is. It’s afternoon. It’s time to put in all the six inch pipe, big systems. I want six inch pipe when I’m dealing with really big areas where you’re talking acreage in a commercial space. And I could’ve just ran a quad pack, but I was worried about the big service trucks, the different things that happen on this airport. I didn’t want to have any issues. If they drive a fuel tanker over the system, it’s going to work. So we do have one six inch perforated pipe, and we have one six inch solid because these airplane hangars do have a roof runoff system. 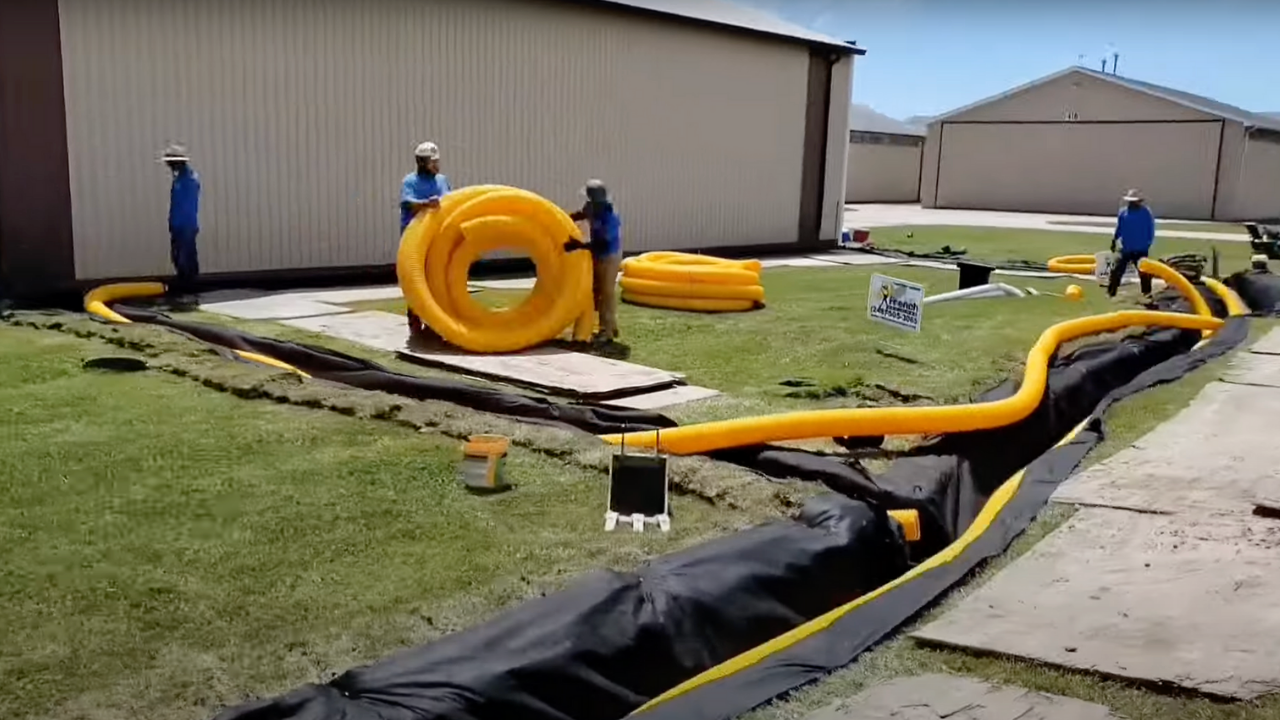 They do have gutters. They do have the three by four by four. I mean, that’s the big boy in Michigan for downspouts that we’re hooking up. All right. Here’s our Bad Seed Sump System with 20 feet additional chamber. That is really cool. So we’re going to be able to keep up with any storm. If the pump falls behind, it’s not going to be a problem. 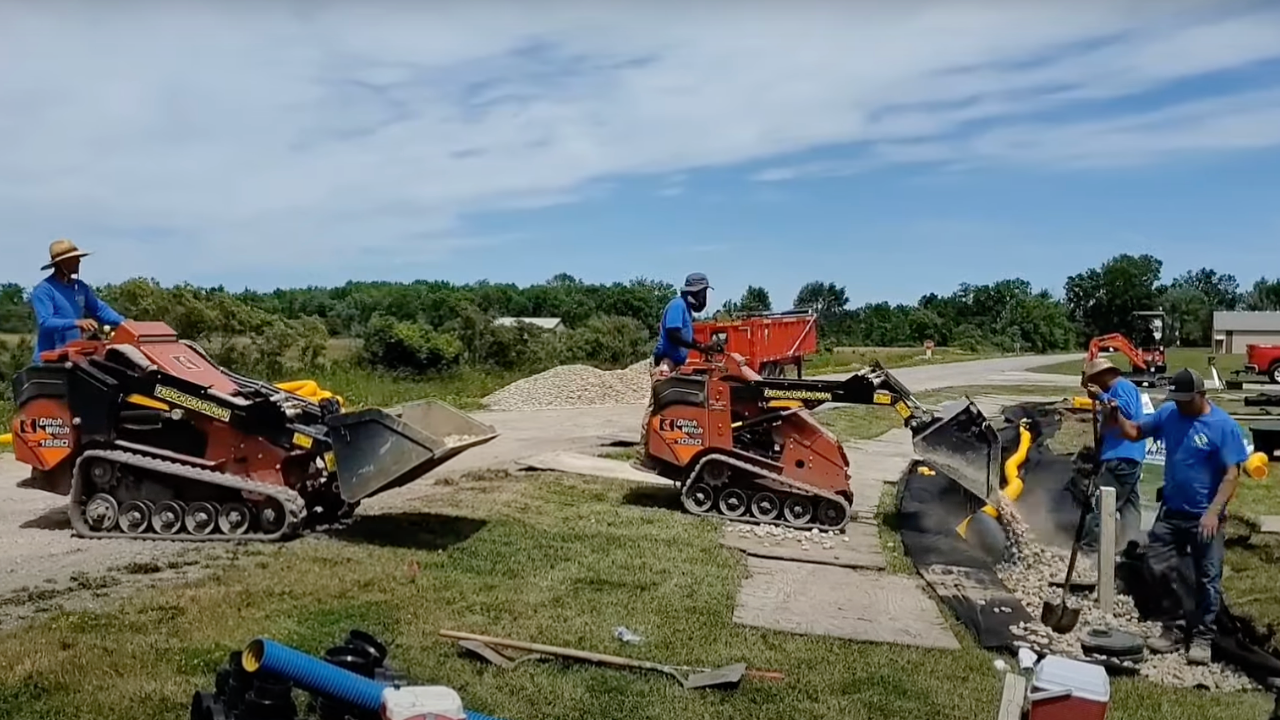 It’s a dynamite setup. All we use outdoors are the chambered sump pump systems. If you have followed us for awhile, you know that we have dozens of variations and different drainage applications. This happens to be the one that we use the most. This is the one that we’re using predominantly outdoors in commercial drainage.

But here in Michigan, we can’t do that. We can’t use check valves. And in the north here, we got to build them different. We got to build them with winter in mind. So we have a heater in this. We’re heating it, and we don’t have a check valve. So we pumped the water up, and then we have it sloped out of here and we’re burring under the road. And that’s a whole other process. I didn’t bore you to tears with that because it’s going to take a few hours for all that. But I just wanted you to see this airport with all the hangars, what we’re doing to dry it up.

French Drain Man has over 35 years of experience solving yard water drainage problems throughout Michigan. When you want it done right the first time, call: 248-505-3065.