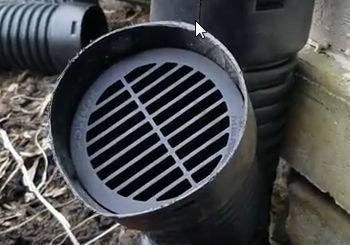 We are yard drainage contractors in Michigan. We’re installing an underground drainage system. We’re burying downspouts. There’s a lot of tricks and tips and things you got to know when you lay out a system. I’m going to go over a couple right now. Hopefully, it helps out the DIY guy and if you’re looking for this service, give us a call. We can design a system for you.

Now, the homeowner due to budgetary restraints wanted to Y this downspout into this downspout.  I wasn’t crazy about it. During a hard rain, there’s a lot of sheet water coming off this roof. Not to mention the second story downspout, in fact, all that second story water is exiting through that gutter trough.

So, this downspout has already so much water that is responsible for. It’s just ridiculous.  During moderate rain, you’re going to get away with this kind of stuff, but you need to use certain tricks. I’ll give you a few pointers right now on how we’re going to make this work for the homeowner. One pipe for these two downspouts to take care of two stories of water over in this trough and then all that flat rooftop, all that sheet water during a hard down pouring rain. So when those gutter troughs are full of water, this is the inside of a gutter trough, that’s it right there.

So when this fills up during an extreme downpour, and they do and they will. This no longer can vent. It’s going to be just full of water.  This is going to be full of water. So we want to move this water as fast as we possibly can. So here’s a trick that we use. We vent the downspout here. This works really, really amazing. You’re going to pick up a lot more speed. Velocity is key. Velocity what you’re after. It’s a gravity-powered system. When the water falls off the roof down into this underground drainage system, you don’t want to lose the velocity that you have picked up. You don’t want to lose it to a poorly vented system. You don’t want to lose it to a pipe.

With this particular technique that we’re using, you don’t want to use a single wall corrugated pipe. You want to use a dual wall. The differences, there’s your single wall. You can see how it’s got the valleys inside it. You’ll lose velocity due to those valleys.  On a short run or a run with a lot of pitch. It doesn’t matter. They work great, but we have a long run, so we’re going with a smooth wall. Corrugated on the outside, smooth on the inside.

This is a dual wall, so that combined with the venting and when you vent this, I know that the NDS, they fit in these Y’s and that’s what we’re using. For a PVC schedule 40 system, like an industrial system, I’ll use the NDS. They do fit better, but for a good Y, I like the poly lock. The snaps in here, fits really, really nice. That is a great way to vent a downspout system. This is a great way to combine downspouts and move the amount of water necessary to prevent it from backing up on top of the roof and then pouring over causing all kinds of damage. Matter of fact, to show you what it was doing, here’s a failed retaining wall. Now there’s going to be thousands and thousands of dollars to make this right, but first, we had to correct the drainage.

For underground drainage systems and southeastern Michigan, north Macomb County, North Oakland County, give us a call at 248-505-3065.